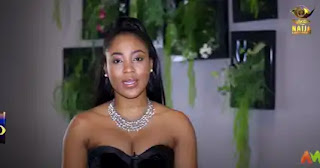 Erica has opened up on events leading to her disqualification [YouTube]
In an exclusive interview with the show’s organisers, the 26-year-old actress tendered an unreserved apology to housemates including Laycon, Prince and Dorathy for her untoward behaviour.
Erica also briefly spoke about how her involvement with Kiddwaya may have negatively influenced her game while hinting on some of the qualities that first attracted her to him.What drew me to Kiddwaya was we have some similarities. We are both carefree, we are both crazy and kind of complete babies too and our conversations flowed naturally”, Erica said.
“I do not think Kiddwaya feels the same way about me but I do not care about that. I think Kiddwaya played a role in my getting strikes. I think it is still my responsibility and I feel I also played a role in him getting strikes”.
On her rift with Laycon, the reality star admitted she may have gone out of line but things went sour between them cause he tried to taint her image after a one time, drunken attempt to kiss him.
With the show behind her, Erica revealed that the biggest lesson she’s learnt from the show is to be content with being by herself. “The lesson I have learnt is I should be happy with being alone. I noticed that I wasn’t fine with being alone but now I know that I have to be fine with being on my own”.
Watch:
Trending
17 year old explains why she set her boyfriend ablaze after misleading her into doing abortion