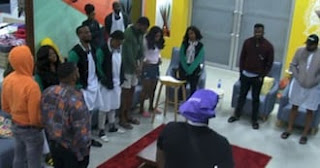 – The show host, Ebuka, revealed that there would be no nominations this week
– Ebuka however added that housemates will now be divided into camps and they would henceforth compete against each other in a nomination challenge
– All the housemates in the losing team will be put up for possible eviction as they will no longer nominate each other in the diary room
The BBNaija reality TV show constantly looks for ways to make the game unpredictable and interesting for viewers.
The show host, Ebuka, has revealed that all the housemates are safe from eviction this week as there would be no nominations.
However, he also informed the housemates about a new twist to the game. The housemates will no longer put each other up for eviction as they will now be divided into two camps.
The camps are to go head to head with each other in a nomination challenge and the losing camp will have all its teammates up for eviction.
Ebuka said: “The housemates will henceforth play the game in their respective camps. The nominations will now be replaced with the nomination challenge where the camps go head to head in a winner wins it all challenge. The camp that loses the challenge will have all the members of the camp automatically up for possible eviction. This week however, all the housemates are safe. There are no nominations and therefore no impending evictions this week.”