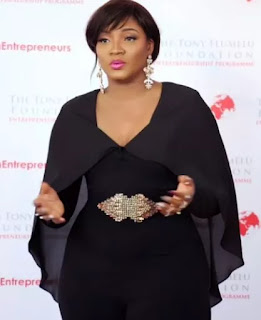 – Omotola Jalade is a gorgeous Nollywood
actress who began her acting career in 1995
– The mother of four was addressing
aspiring filmakers and actors at
a mentorship program and mentioned that
she doesn’t believe in love at first sight
– Following the circumstance of how her
marriage to Captain Matthew started, most
people find it hard to understand her
statement
Beautiful Omotola
Omotola Jalade-Ekeinde is a Nollywood
actress who beagna her acting career in
1995. The 38-year-old actress got married a
year after she began her career and has her
marriage still going strong despite being
married at the age of 19.
The mother of four was a panelist at a
recently concluded mentorship program for
fimlmakers and actors “Innovation
Warehouse” where she addressed aspiring
filmmakers and actors. In her statement she
offered advice on marriage, spirituality and
relationships. Stating that she doesn’t
believe in love at first sight and mentioned
that her audience get involved romantically
with people who understand show business.
“ They must believe in you. If you’re a Christian
and you marry someone who is not born again
then you are on your own.
“Your partner needs to be stronger than you.
They are the ones getting the aftermath of
your own action.
“Choose a partner who understands
entertainment. Don’t choose your fan.
Personally, I don’t believe in love at first sight.
“Pick someone who sees your heart, your
soul, someone who sees the real you and not
afraid to tell you about your flaws.
“Discipline is key. Everyone wants freedom but
too much freedom is bad. Be disciplined. It’s
better to be an enemy to a work partner than
to your family. Learn to say No.”
According to her husband of 20 years, when
once asked how he met his wife, he said he
knew her when she was only a teenager of
16 but waited till she became of age and
proposed to her. Following that story, one
can easily guess that his love for the
actress was “love at first sight.”
If it be true, then it is in clear contrast of
the actress stand point as she is a product
of “love at first sight.”