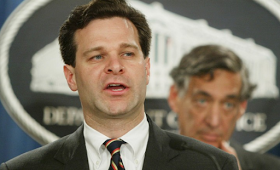 President Donald Trump has just announced on
twitter that he plans to nominate Christopher A.
Wray, the former assistant attorney general in
charge of the Justice Department’s criminal
division, to be the next FBI director.
The president’s announcement comes one day
before former FBI Director James Comey, whom
Trump fired last month, is set to testify before
the Senate.
Trump’s tweet reads, ‘I will be nominating
Christopher A. Wray, a man of impeccable
credentials, to be the new Director of the FBI.
Details to follow’.
Before now, Wray headed the Justice
Department’s criminal division from 2003 to
2005 under President George W. Bush and is
currently a litigation partner at the DC-based
law firm King & Spalding, where he chairs the
firm’s Special Matters and Government
Investigations Practice Group.
He also represented New Jersey Gov. Chris
Christie during the “Bridgegate” investigation
into lane closures at the George Washington
Bridge.