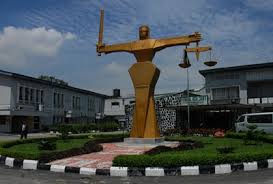 Magistrate-court
An Ikeja Magistrate’s’ Court in Lagos on Friday
granted N200,000 bail to a 50-year-old man,
Monday Alfred, who allegedly beat up a
security guard, Idowu Ikalewumi, to a pulp.
Image
Alfred, who allegedly stole two phones valued
at N 25,000 from Ikalewumi and cash of
N100,000 belonging to Elizabeth Akintunde, is
a resident of Oshodi area of Lagos.
The Magistrate, T.O Shomade, who granted
the defendant bail, ordered that he must
produce two sureties in like sum as part of
the bail conditions.
Shomade said the sureties must be gainfully
employed and must show evidence of two-
year tax payment to the Lagos State
Government.
Earlier, the Prosecutor, Insp. Raji Akeem, had
told the court that Alfred, who entered a not-
guilty plea, is facing a four-count charge of
conspiracy, stealing, assault and threatening
violence.
He said the defendant committed the
offences on Dec. 4 at Adewale Crescent,
Boladale Street, Oshodi, Lagos.
Akeem explained that Ikalewumi was a
security guard at Elizabeth Akintunde’s house.
He said that Ikalewumi was at his duty post
when he saw the defendant disconnecting the
house electricity line and when he confronted
Alfred about what he was doing, he gathered
some area boys and told them to beat up
Ikalewumi.
“Ikalewumi said that the accused and his
gang beat him up while he was trying to
perform his duty a security guard.
“He said that the defendant also used the
opportunity to enter his employer’s house,
Akintunde, where he stole N100,000 cash and
two mobile phones valued at N25,000.
Akeem said the case was reported to the
police and Alfred was apprehended but his
accomplices were nowhere to be found.
The prosecutor added that the offences
contravened the provisions of sections 56,
171, 285 and 409 of the Criminal Law of
Lagos State, 2011.
Section 171 prescribes three-year jail term for
assault and harm. Meanwhile, further hearing
in the case was fixed for Jan. 11, 2017