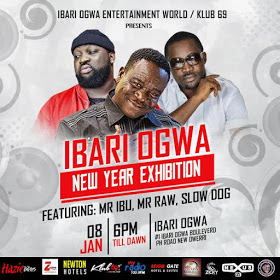 This time, the event which holds today, Sunday
at the usual Ibari Ogwa Boulevard, along Port
Harcourt road, Owerri will be headlined by
award-winning actor, John Okafor, popularly
known as Mr. Ibu, alongside other top
entertainers like Mr. Raw, Slow Dogg etc.

Expected to be an evening of quality
entertainment to the customers of Ibari Ogwa,
it promises to be refreshing and fun-filled, even
as it will be hosted by comedian, TwoCanTalk,
with after party at Klub69.