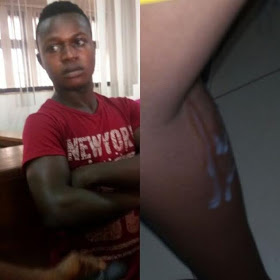 This young man received hot slaps today after he
masturbated and then ejaculated on a female
customer at Diamond Bank, Nnewi branch,
Anambra State. Below is the shocking and
frightening account of the incident by victim,
Anaeto Amaka Vivi, on Instagram

“I went to Diamond bank (Nnewi) today
and went to their customer service to
lay a complaint but the crowd at the
spot was much so I stood in one of the
queues there, there was this guy (via
pix) behind me I noticed he was
somehow resting on me so I moved a
little and he moved with me,
I noticed something suspicious so I
looked back I saw him crossed both of
his hands covered with a paper down his
waist…. I kept mute and was busy with
my phone I noticed something behind me
again I turned and saw him with his
hands at the same position so all of a
sudden I felt something hot dripped on
my leg to my outmost surprise it was a
sperm I turned gat hold of him and gave
him some hot slaps I know he has never
received in his life before…. if not for
the securities that intervene like
seriously he won’t live to remember a
day like this #what_an_assault