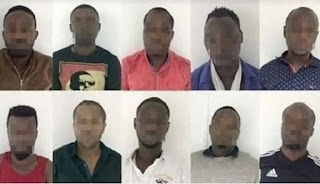 The Criminal Court of Sharjah in the United Arab Emirates has sentenced eight Nigerians to death for carrying out what it termed as “a string of armed robberies” at money exchanges and cash machines across the emirate in December 2016.
Khaleej Times, a UAE medium, reported on Thursday that the ninth suspect was however sentenced to six months imprisonment for possession of stolen money. He would be deported after serving the jail term.
The report noted that the ninth suspect denied the charge against him and claimed that one of the suspect’s brothers asked him to transfer

Dh60,000 to an account in his home country (Nigeria). The court accused the convicted persons of armed robbery, public assault and seizing money by force. Some of the accused were said to have confessed to their
Trending
17 year old explains why she set her boyfriend ablaze after misleading her into doing abortion

crimes while others denied the charges.

The UAE Police said they checked surveillance cameras and found fingerprints to identify the perpetrators, which led to their arrest. One of the defendants was said to have returned part of the stolen money. A total of Dh1.8m cash was reportedly stolen from three locations.
In the ruling, which took place on Wednesday, only eight persons were convicted out of the 20 persons arrested for the crime, which involved attacking security guards in four violent attacks at ATMs and money exchanges across

Sharjah in late 2016. According to a report by Gulf News, a daily English Newspaper in Dubai, the verdict was handed down by Judge Majid Al Muhairi of Sharjah Criminal Court.

Meanwhile, Gulf News said a prosecutor pointed out that the judgement could be appealed and that the sentences could be downgraded to life imprisonment.