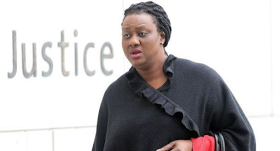 A Nigerian woman who was trafficked into
Ireland and forced into prostitution narrated to
the court how she was made to was have sex
with up to ten men a day for no payment.

She disclosed this in Dublin court on Tuesday,
January 17th, during the trial of Joy Imasogie,
40, (pictured above) an alleged trafficker.

The woman told a jury she underwent a “voodoo
process” in Nigeria before coming to Ireland,
during which she swore she would not report
Imasogie.
The woman also alleged that while she was
working as a prostitute, Imasogie’s husband,
Kingsley, began “taking advantage” of her and
having sex with her.

Imasogie of Chapleswood Crescent, Hollystown,
Dublin 15, has pleaded not guilty to organising
for the woman to enter the country illegally, to
compelling or coercing the woman to be a
prostitute and to controlling or directing the
activities of prostitution for gain on dates
between March 2006 and April 2008.

On her second day of evidence at Dublin Circuit
Criminal Court the alleged victim said she lived
in a flat in Phibsborough where she was visited
by up to ten men a day. She said the visits
usually came at night or at lunchtime.
She told Kerida Naidoo SC, prosecuting, that
Imasogie and another woman made the
arrangements and that she would receive a
phone call when a man was on the way. She
said the prostitution service was advertised on
a website run by a woman in England.

She said that she might receive €2,000 a day
from the men. Of that Imasogie would allegedly
take half for arranging the men to come and
half to pay off a €50,000 “debt” she said the
woman owed her for bringing her to Ireland.
The alleged victim said she was left with no
money at the end of the day and that she
received no allowance. She said she had to
demand money from the accused for personal
items and that Imasogie would sometimes bring
her food.

The woman said Imasogie gave her a false
passport to show to gardaí if they called at the
door. One day gardaí called but didn’t believe
the passport was genuine. The alleged victim
said she went upstairs and jumped out the
window to escape, breaking her leg in the
process.
She said she was in a cast for two months and
during that time she was told by the accused to
“answer the phones and direct people”.

She returned to prostitution after the leg
healed, she said. Sometimes the work involved
travelling down the country for “overnight”
visits. She said the accused or her husband
Kingsley would drive her to there.
She alleged that after she had been in Ireland
for about a year, Kingsley started to take
advantage of her and have sex with her.

The woman said that after some time she
thought she had worked off about €40,000 of
the €50,000 debt. When she asked Imasogie
about this, the accused replied that she had
lost the book she used to keep track of this and
that she believed the woman had paid off only
€15,000 or €20,000.

The alleged victim said in 2008 she left
Imasogie and refused to return. She said she
didn’t want to be a prostitute anymore and
refused to have any further contact with the
accused.

The trial continues before Judge Patricia Ryan
and a jury. Will keep you updated…