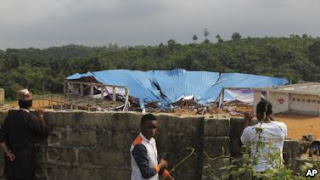 tractor, according to thestate news agency.
Governor Udom Emmanuel, who was in
the church at the time of the collapse
and escaped without injury, ordered
the arrest Sunday.
Reports of the death toll vary widely,
with some media saying as many as 160
people died, others placing the toll
closer to 60, and local government
officials only confirming 27 dead and
30 injured.
Hundreds of people were in the
Reigners Bible Church in the city of
Uyowhen the roof collapsed.The
church’s founder, who survived the
incident, was to be made a bishop
during the service.
One survivor told local media from his
hospital bed that the roof fell about 30
minutes into the program. “Suddenly,
the roof from the middle fell on
worshippers. The governor was quickly
rescued. But others were not that
lucky.”
Governor Emmanuel tweeted that he
personally supervised rescue operations
at the scene. He declared Sunday and
Monday as days of mourning.
A spokesman for the governor said the
state will conduct an investigation into
the collapse.