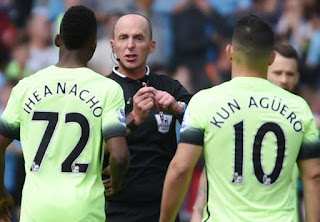 Sergio Aguero’s indiscretions have opened the
door for the Nigeria wonderkid to shine once
again
Last season it was Sergio Aguero ’s relentless
fitness concerns that gave Kelechi Iheanacho
the opportunity to impress.
With the Argentine superstar sidelined with a
hamstring injury, and with Cote d’Ivoire forward
Wilfried Bony looking a shadow of the player
that Manchester City signed at such great
expense, Kelechi was handed the baton.
He didn’t disappoint, and while it was clear—at
times—that he was still a young player making
his way in the game, he ended the campaign
with eight goals in 26 appearances (seven
starts)—averaging one strike every 94 minutes
in the Premier League.
Iheanacho stats 2015-16
The wonderkid’s form transformed him from
being a relative unknown beyond Nigerian
shores to a potential City superstar, and
certainly a viable attacking option for the Sky
Blues and one of the brightest young attacking
talents in the world game. 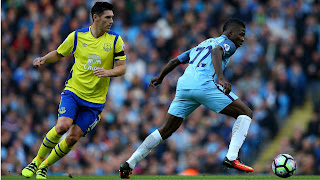 There was excitement, too, about how
Iheanacho would fare under the tutelage of Pep
Guardiola. Here was a coach who specialised in
making genuine world-class superstars of
exciting talent, and the likes of Lionel Messi,
Thomas Muller and David Alaba are some of
the game’s finest players due…in no small
part…to the work of the former Barcelona and
Bayern Munich boss.
However, would Iheanacho have the same
opportunities this season as he did last year?
Not only has Guardiola invested in the likes of
Leroy Sane, Gabriel Jesus and Nolito, but the
Citizens also have players such as Raheem
Sterling, Jesus Navas and Kevin De Bruyne
jostling for attacking spots.
Then there was Aguero, who surely wouldn’t
have such misfortune with injuries again!
Iheanacho stats 2016-17
Would this season be one of regression for
Kelechi? 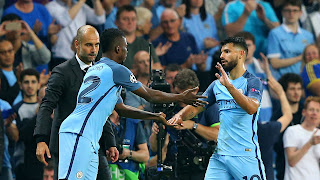 Would he be resigned to the bench and made
to watch on as the club’s more high-profile
stars fire City to the title?
In truth, Iheanacho has fared well under
Guardiola, who has lavished the youngster with
praise, particularly after he helped the Citizens
through a series of tricky opening encounters.
He pressured Sunderland into conceding an
own goal in the Spanish coach’s opener, before
contributing an assist in the demolition of Stoke
City and following that up—memorably—with a
goal and an assist in the derby triumph over
Manchester United. 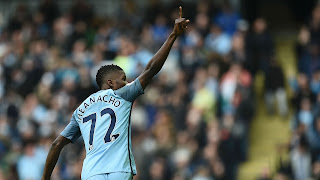 Since then, there have been goals against
Borussia Moenchengladbach and Bournemouth,
although it can’t be ignored that Iheanacho’s
key contributions have dried up significantly
since the beginning of Autumn.
Before he found the net against Celtic in
midweek, the youngster had found the net just
once in his previous seven appearances,
compared to three in six before that.
Aguero, by contrast, has barely missed a step
upon his return to form and fitness.
He has 10 goals in 12 EPL appearances to date,
and a further three in five in the Champions
League. With the Argentine registering these
kinds of numbers, Guardiola’s side have
regularly looked like title contenders, even if
there was an unhappy fallow period in October.
However, while the injuries have stayed at bay,
they’ve been replaced by disciplinary problems,
with Kun’s gametime limited both by his ill-
placed elbow into Winston Reid’s jaw and,
latterly, a savage, scything ‘attack’ on Chelsea’s
David Luiz last weekend both leading to
suspensions. 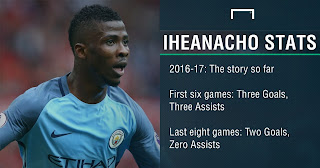 The forward’s latest misdemeanour means thathe’ll be missing now for four matches,andwill
sit out City’s upcoming showdowns withWatford, Arsenal, Hull City and Leicester City.
It’s miserable news for Guardiola, whoseunruffled public persona will surely have been
transformed when the dressing room doorclosed at the Etihad Stadium last weekend.
Yet while Aguero’s suspension comes as
desperate news for City and Pep, it could proveto be the boost Iheanacho needs to rediscovehis momentum in the North-West. 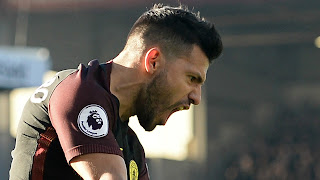 “I have a responsibility to be the striker for the
team, replacing Sergio when he is not around,”
Iheanacho told City’s official website. “I have to
prove myself, give my best and work hard for
the team and make sure we get the wins we
need.
“[Aguero]’ telling me I should do very well and
they are words of encouragement from him.
So, I’m going to do it.” 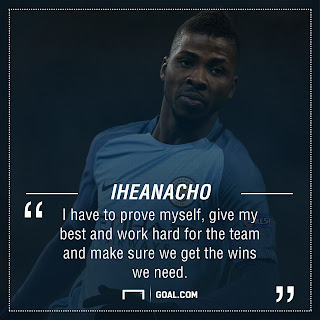 While Aguero’s suspension is doubtless a
setback for the Citizens, it’s a major
opportunity for Iheanacho to step up and prove
to Guardiola that he can help the Sky Blues
negotiate a series of tricky fixtures and fire the
2014 champions back to the top of the table.