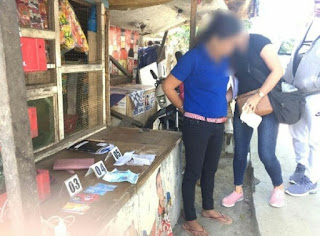 Authorities in the Philippines arrested a 45-year-old woman who was caught offering to sexually abuse her daughters and stream live the exploitation for a paying online predator.

Operatives of the Women and Children Protection Center – Visayas Field Unit (WCPC-VFU) carried out an entrapment operation in a northern barangay in Mandaue City around 9 a.m. on Tuesday morning, April 16.

They arrested the suspected online trafficker after she offered her two youngest daughters, ages 6 and 7, for online sexual abuse.
The suspect had transmitted online sexually explicit materials involving the two girls.

This operation resulted from a “cybertip” received by the Department of Justice-Office of Cybercrime (DOJ-OOC) from the National Centre for Missing and Exploited Children (NCMEC), which is based in the United States.

Social workers from the Department of Social Welfare and Development (DSWD) were also present in the rescue.
Aside from the three girls, authorities also removed the suspect’s two other children, ages 13 and 17, for assessment as they are considered at risk of exploitation.
The siblings are now receiving trauma-informed care.

This operation was a result of the Advanced Investigative Workshop (AIW), which is presented by IJM, with funding from the US Department of State, in partnership with Australian Federal Police, National Police of the Netherlands, UK National Crime Agency, INTERPOL, US Federal Bureau of Investigation, and Queensland Police Service, and with additional support from Western Union, PLDT, and Australian Centre to Counter Child Exploitation.

The outcomes in this matter were supported by the Philippine Internet Crimes Against Children Center (PICACC), which serves as a hub for domestic Philippine and foreign law enforcement collaborative efforts to combat online sexual exploitation of children (OSEC).

The PICACC is a joint initiative between the National Bureau of Investigation and the Philippine National Police supported by the Australian Federal Police, United Kingdom National Crime Agency and non-government organization International Justice Mission.

Occurring in different communities in the Philippines, OSEC is a crime that violates the Anti-Trafficking in Persons Act or Republic Act 9208, as amended by RA 10364, which comes with a maximum penalty of life imprisonment and a fine of P2 million to P5 million pesos.

Typical OSEC offenses also violate RA 10175 or the Cybercrime Prevention Act of 2012; and RA 9775 or the Anti?Child Pornography Act of 2009.
Both have penalties equivalent to 20 to 40 years imprisonment. (PR)