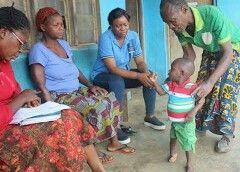 The Cross River State government, Nigerian
Medical Association and the Nigerian Red Cross
have teamed with the Club Foot Project to
ensure that a child, who is popularly known as
the ‘boy with the Club Foot’ in Ekpeneki
community in Odukpani LGA receive proper
medical treatment. 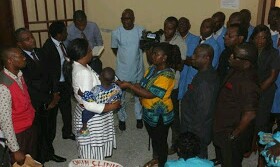 Anthony Peter is suffering from a medical
condition called Talipes which is commonly
known as Club Foot. His condition was initially
misdiagnosed as Polio.
The State Commissioner for Health, Dr. Inyang
Asibong led the state Epidemiology team
headed by Mrs. Patience Uke to conduct a
sensitization exercise at the community and
also to bring the child to the University of
Calabar Teaching Hospital where he is currently
undergoing a correction process on the leg.

“We have a lot of these types of communities,
hard to reach communities, in Cross river state,”
said Dr. Ashibong.
“I’m glad we’ve been able to experience
firsthand what these communities are like and
what it is to get here, to get access, to get
health commodities to these communities.”

“The child is suffering from a medical condition
called Talipes which is commonly known as
Club Foot. And there’s real hope because the
child is still a baby, he’s barely two years old.
At this point the bones are not fused meaning
something can be done even right here in Cross
River State. The boy’s mother confirmed that
her baby was vaccinated upon delivery in 2015,
putting to rest further the Poliomyelitis rumor.
“It became necessary for the health team to
come and take the child for treatment because
of the need to improve the life of the little child
given the lack of proper orientation in the
community.
“We had to come ourselves to make sure the
child is actually taken for treatment because
the community has a difficult terrain and
there’s a possibility of not taking the child for
medical care if we don’t come ourselves” she
said.