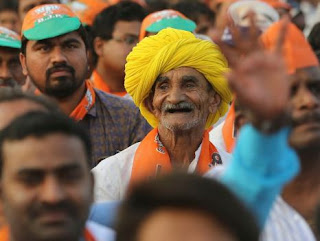 India’s general elections, the biggest democratic exercise in the world, get underway this month and will decide the leadership and direction of the country of 1.3 billion people for the next five years.
Prime Minister Narendra Modi and his nationalist Bharatiya Janata Party came to power with a historic landslide victory in the last national polls, in 2014. But his promises of “achhe din,” or better days ahead, have given way to disappointment over sluggish economic growth, discontent among farmers and rising unemployment, making the race more of a contest than many expected.
The logistics of ensuring free and fair elections for the largest voter base in the world are complex and overwhelming.
Here’s a look at India’s elections, by the numbers:
900 million: Eligible voters
More than 900 million Indians nearly three times the entire U.S. population will be eligible to cast ballots. That includes 45 million people who turned 18 and became eligible to vote since 2014.
543: Parliamentary seats at stake
Voters cast their ballots for representatives in the Lok Sabha, the lower and more powerful house of India’s two-tiered Parliament. The Lok Sabha has 543 elected seats, and the party or coalition that holds a 272-seat majority selects the prime minister.
66.4%: Voter turnout in 2014
The Indian electorate takes participatory democracy seriously. The 2014 election saw a record-high turnout of more than 550 million voters, or nearly two-thirds of eligible voters 66.4%. That’s a greater share than the 61% who cast ballots in the 2016 U.S. general election.
$5 billion: Cost of 2014 election
The 2019 election will almost certainly be the most expensive in Indian history, and among the most expensive in the world. Parties and candidates spent $5 billion in 2014, according to the New Delhi-based Center for Media Studies, and some experts have predicted that figure could nearly double in 2019.
7: Number of voting days
Federal security forces watch over polling stations, a mammoth undertaking that requires voting to be spread across a five-week period. Voting will take place on seven different days between April 11 and May 19, with dozens of constituencies casting ballots each day.