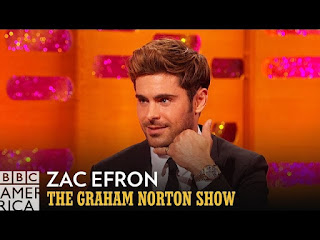 Zac Efron never met Michael Jackson in person, but he did share an emotional phone call with the late King of Pop, who was one of his idols. The actor, now 30, unexpectedly ended up on the line with Jackson while in Paris promoting one of the High School Musical movies, when he was 20 or 21 years old. He shared the memory during a recent appearance on
The Graham Norton Show .
HSM director Kenny Ortega, who worked with Jackson on his documentary and concern film This Is It just before the singer’s death, ended up taking a call from Jackson while out to dinner with Efron.
“His phone rang, and I remember I got this look, like … ‘You want this phone call.’ I was like, ‘Okay,’ so I came over and was like, ‘What’s going on?’ He goes, ‘It’s Michael Jackson.'”

Efron took the call and rambled on about how he was a huge fan and how Jackson was his hero. “I was just at a loss for words,” he recalled. “He [Jackson] said, ‘That’s really nice. Can you hand the phone back to Kenny?'”
But when Jackson realized who he’d just been talking to, he apparently got back on the phone with him and said: “Oh, this is Zac from High School Musical? I love what you do. I’m a huge fan.” Of course, at this point, Efron “lost it. I lost my balance. I think I fell over into the wall … I just started crying. I was a mess.”
When Efron once again told him that he was his hero and “the reason I do what I do,” and that he’d shown him how to dance and how to shine, Jackson started crying, too.
“He ended the whole conversation with something along the lines of, ‘Hey Zac, isn’t it awesome? Dreams really do come true, don’t they?” Efron said.

Watch him tell the story in the clip below.